Posted on January 9, 2011 by Action for Freedom — Leave a comment 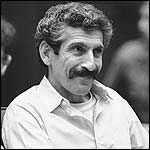 Angelo Buono, one of the Hillside Stranglers, is sentenced to life in prison for his role in the rape, torture, and murder of 10 young women in Los Angeles. Buono’s cousin and partner in crime, Kenneth Bianchi, testified against Buono to escape the death penalty.

Buono, a successful auto upholsterer, and Bianchi began their serial crime spree in 1977 when Bianchi moved from New York to live with his cousin. They started talking about how the prostitutes that Buono often brought home would hardly be missed by anyone if they disappeared. Idle speculation quickly led to action and the pair raped and strangled their first victim, Yolanda Washington, on October 17.

Within a month Buono and Bianchi had attacked three other women and developed a trademark method of operation. They picked up the women in their van, drove them back to Buono’s house where they were sexually assaulted in all manners, tortured, and strangled to death. The duo then thoroughly cleaned the bodies before taking and posing them in lascivious positions on hillsides in the Los Angeles area, often near police stations. Thus, they earned the nickname the “Hillside Strangler.” The press assumed that it was the work of one man.

Following the death of the 10th victim in February 1978, the murders suddenly stopped. Buono and Bianchi were no longer getting along, even with their common hobby. Bianchi moved to Washington and applied for a job at the Bellingham Police Department. He didn’t get the job, but became a security guard instead. However, he couldn’t keep his murderous impulses in check and killed two college students. A witness who had seen the two girls with Bianchi came forward and the case was solved.

Bianchi, who had seen the movies Sybil and The Three Faces of Eve many times, suddenly claimed to have multiple personalities. He blamed the murders on “Steve,” one of his alternate personalities. Psychiatrists examining Bianchi quickly dismissed his ruse and Bianchi then confessed to the Hillside Strangler murders, testifying against Buono to avoid the death penalty in Washington.

During his trial, Buono fiercely insisted on his innocence, pointing to the fact that there was no physical evidence tying him to the crimes. Buono’s house was so clean that investigators couldn’t even find Buono’s own fingerprints in the home. But after more than 400 witnesses testified, Buono was convicted and sentenced to life in prison without the possibility of parole.

Angelo Buono died from a heart attack on Sept. 21, 2002 at the age of 67. Kenneth Bianchi was denied parole in September 2005 and remains in prison.

Tagged with: 1984, Crime, January 9, postaday2011, The Hillside Stranglers, This Day in History, This Day In History
Posted in Uncategorized