Posted on February 6, 2011 by Action for Freedom — Leave a comment 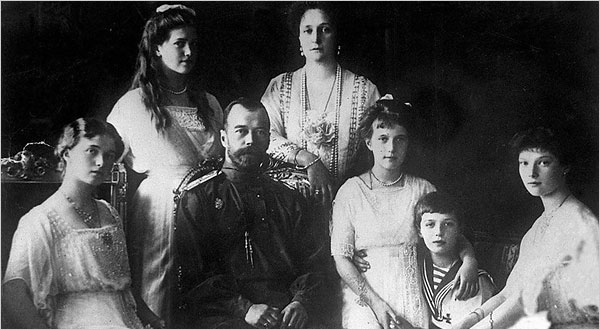 On February 6, 1928, a woman calling herself Anastasia Tschaikovsky andclaiming to be the youngest daughter of the murdered czar of Russia arrives in New York City. She held a press conference on the liner Berengaria, explaining she was here to have her jaw reset. It was broken, she alleged, by a Bolshevik soldier during her narrow escape from the execution of her entire family at Ekaterinburg, Russia, in July 1918. Tschaikovsky was welcomed to New York by Gleb Botkin, the son of the Romanov family doctor who was executed along with his patients in 1918. Botkin called her “Your Highness” and claimed that she was without a doubt the Grand Duchess Anastasia with whom he had played as a child.

Between 1918 and 1928, more than half a dozen other women had come forward claiming to be a lost heir to the Romanov fortune, so some American reporters were understandingly skeptical of Tschaikovsky’s claims. Nevertheless, she was treated as a celebrity during her stay in New York and occasioned society parties and fashionable hotels worthy of a Romanov heir. Registering for one hotel during her visit, she used the name Anna Anderson, which later became her permanent alias.

In 1917, the February Revolution in Russia forced Czar Nicholas II to abdicate the throne. Nicholas, his wife Alexandra, and their four girls and one son were held at Czarskoye Selo palace and then taken to Ekaterinburg in the Urals after the Bolsheviks seized power in the October Revolution. Civil war raged throughout 1918, and in July anti-Bolshevik Russian forces approached Ekaterinburg. Fearing that Nicholas and his family would be rescued, the local authorities passed a death sentence on the Romanovs.

Just after midnight on July 17, 1918, Nicholas, Alexandra, their five children, and four family retainers, among them Dr. Botkin, were ordered to dress quickly and go down to the cellar of the house in which they were being held. There, the family and servants were arranged in two rows–for a photograph, they were told, to quell rumors that they had escaped. Suddenly, nearly a dozen armed men burst into the room and shot the imperial family in a hail of gunfire. Those who were still breathing when the smoked cleared were stabbed to death.

The executioners then took the bodies to an abandoned mine shaft some 14 miles from Ekaterinburg, burned them in a gasoline-fueled bonfire, and doused the bones with sulfuric acid to further disguise the remains. Finally, what was left was thrown into the mine pit, which was covered with dirt.

At first, the Bolshevik government reported that only Nicholas was executed and that his wife and children were moved to a safe location. Later, reports that the entire family had perished were confirmed by Russian investigators. At the same time, however, a persistent rumor spread through Europe, telling of a Romanov child, usually Anastasia, who had survived the carnage. Several pretenders came forward, hoping to cash in on the Romanov fortune reportedly held in European banks, but they were quickly exposed as frauds. Europe, however, had yet to meet Anna Anderson.

In 1920, an apparently suicidal young woman was pulled from the Landwehr Canal in Berlin. She refused to tell authorities her identity and was committed to the Dalldorf Asylum, where she lived in anonymity until 1922, when she suddenly announced that she was none other the Grand Duchess Anastasia.

At the time, Europe was filled with Russian exiles who had fled the Bolshevik Revolution, and a number of sympathetic czarists rushed to the aid of this young woman, who at first glance was certainly articulate and beautiful enough to be the lost Anastasia. Her body showed ugly scars, which she said she incurred from Bolshevik knives during the execution of her family. One Bolshevik soldier, she said, finding her alive, had helped her, and she eventually escaped to the West. Several months after claiming to be Anastasia, she was released from the asylum and moved in with the first of a long line of supporters.

During the next few years, her entourage of Russian emigres grew, and she became particularly close to Gleb Botkin, who as the son of the slain Romanov family physician had spent considerable time with the imperial family in his childhood. During this time, numerous Romanov relatives and acquaintances interviewed her, and many were impressed by both her resemblance to Anastasia and her knowledge of the small details of the Romanov’s family life. Others, however, left skeptical when she failed to remember important events of young Anastasia’s life. Her knowledge of English, French, and Russian, which the young Anastasia knew how to speak well, were also significantly lacking. Many blamed these inconsistencies on her reoccurring mental illness, which led to short stays in mental institutions on several occasions.

Meanwhile, her supporters began a long battle to win her legal recognition as Anastasia. Such recognition would not only win her access to whatever Romanov riches remained outside the USSR but would make her a formidable political pawn of czarist exiles who still hoped to overthrow Russia’s communist leaders.

The Grand Duke of Hesse, Alexandra’s brother and Anastasia’s uncle, was a major critic of this effort, and he hired a private investigator to determine Anastasia Tschaikovsky’s true identity. The investigator announced that she was in fact Franziska Schanzkowska, a Polish-German factory worker from Pomerania who had disappeared in 1920. Schanzkowska had a history of mental instability and was injured in a factory explosion in 1916, which accounted for the scars. These findings were published in German newspapers but were not proved definitively.

The woman who became known as Anna Anderson continued her fight for recognition, losing several court cases as the decades passed. A French play about her story, Anastasia, debuted in 1954, and in 1956 an American film version appeared, with Ingrid Bergman winning an Academy Award for her title role.

In 1968, Anne Anderson married an American history professor, J.E. Manahan, and moved to the United States, living her final years in Charlottesville, Virginia. In 1970, she lost her last major suit, and a remaining portion of the Romanov fortune was awarded to the duchess of Mecklenberg. Anna Anderson Manahan died in 1984.

In 1991, Russian amateur investigators, using a recently released government report on the Romanov execution, found what they thought to be the Romanov burial site. Russian authorities took over and exhumed human remains. Scientists studied the skulls, claiming that Anastasia’s was among those found, but the Russian findings were not conclusive. To prove that the remains were indisputably those of the Romanovs, the Russians enlisted the aid of British DNA experts.

First, the scientists tested for sex and identified five females and four males among the remains. Next they tested to see how, if at all, these people were related. A father and mother were identified, along with three daughters. The four other remains were likely those of servants. The son Alexei and one daughter were missing.

To prove the identity of Alexandra and her children, the scientists took blood from Prince Philip, the consort of Queen Elizabeth II and the grand nephew of Alexandra. Because they all share a common maternal ancestor, they would all share mitochondria DNA, which is passed almost unchanged from mother to children. The comparison between the mtDNA in Philip’s blood and in the remains was positive, proving them to be the Romanovs. To prove the czar’s identity, who would not share this mtDNA, the remains of Grand Duke George, the brother of Nicholas, were exhumed. A comparison of their mtDNA proved their relation.

A Romanov daughter was missing from the burial site. Could Anastasia have escaped and resurfaced as Anna Anderson? In 1994, American and English scientists sought to answer this question once and for all. Using a tissue sample of Anderson’s recovered from a Virginia hospital, the English team compared her mtDNA with that of the Romanovs. Simultaneously, an American team compared the mtDNA found in a strand of her hair. Both teams came to the same decisive conclusion: Anna Anderson was not a Romanov.

Later, the scientists compared Anna Anderson’s mtDNA with that of Karl Maucher, a great nephew of Franziska Schanzkowska. The DNA was a match, finally proving the theory put forth by a German investigator in the 1920s. One of the great mysteries of the 20th century was solved.