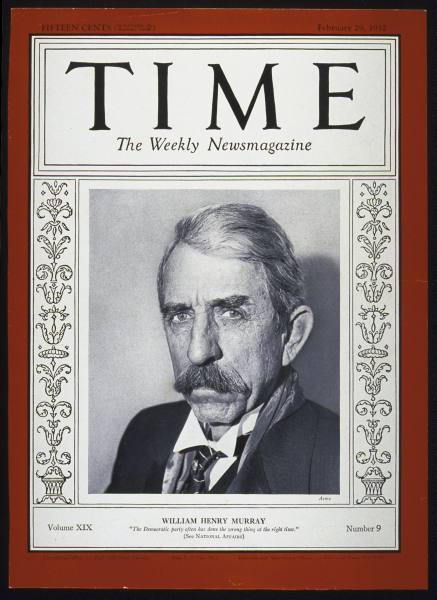 One of the most colorful western politicians of his day, William “Alfalfa” Murray makes the cover of Time magazine after announcing his long-shot candidacy for the Presidency.

Born in poverty near Toadsuck, Texas, in 1869, Murray dabbled in a variety of careers before finally settling on law. In 1898, he moved to Oklahoma Territory, where he earned his odd nickname by establishing a successful farm renowned for its alfalfa. He also developed a passionate interest in Democratic politics and played a major role in creating the new Oklahoma state constitution in 1906. The following year he won election to the Oklahoma House of Representatives, where he became its speaker.

In 1916, Murray took an unpopular stand against American preparations for war in Europe that brought an abrupt and seemingly permanent end to his political career. Falling back on his farming skills, he founded an agricultural colony of U.S. citizens in Bolivia that nearly bankrupted him. When he returned to the U.S. in 1929, though, the political landscape had changed to his benefit. The beginning of the Great Depression pushed many Americans to look for unorthodox solutions for their problems, and Murray suggested several improbable plans to help the nation escape economic depression.

Campaigning for Oklahoma governor in 1930, Murray portrayed himself as a protector of the downtrodden. His demagogic promises to take from the rich to give to the poor won him the election in a state hit hard by the Depression. To further demonstrate his commitment to the impoverished, he allowed the unemployed to grow potatoes on the grounds of the governor’s mansion. In 1932, he made an improbable bid for the presidency, promising to provide “Bread, Butter, Bacon, and Beans” to every hungry American. More a publicity stunt than a serious bid for the presidency, Murray’s candidacy nonetheless landed him on the cover of Time magazine.

One of the dozens of local demagogic agitators that gained national prominence in the Depression years, Murray’s political agenda was eventually overshadowed by Franklin Roosevelt’s New Deal. Again failing to win re-election in 1934, Murray spent the remainder of his life attempting a political comeback and writing angry denunciations of FDR and the New Deal.