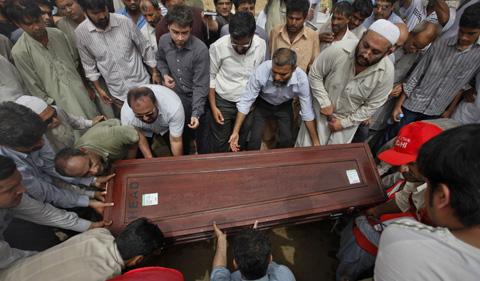 Relatives and colleagues carry the casket of Pakistani journalist Saleem Shahzad for burial after funeral prayers in Karachi, June 1, 2011

Saleem Shahzad, a prominent Pakistani journalist whose tortured body was discovered this week, was buried in Karachi on Wednesday.

The 40-year old father of three worked for the Hong-Kong based Asia Times Online and other  publications and had recently written an article in which he alleged links between al-Qaida and the Pakistani Navy.

Human Rights Watch researcher Ali Dayan Hasan said Shahzad had told him that he feared Pakistani intelligence agents were after him.

But an unnamed official with Pakistan‘s Inter-Services Intelligence agency says allegations the spy agency had threatened Shahzad or was somehow involved in his murder were “baseless” and” unfounded.”

The ISI official told the Associated Press of Pakistan that the journalist met with ISI officials in October of last year to discuss a story Shahzad had written and that the meeting was “friendly.”

Shahzad’s killing has once again thrust Pakisan into the spotlight, reminding the world that it is  among the most dangerous places on the earth to be a journalist — and a place where many such murders go unsolved, says Bob Dietz, Asia Program Coordinator for the New York-based Committee to Protect Journalists.

What are we to make of this brutal killing of Mr. Shahzad?

“This is just more of the same and, frankly, Pakistan is geting a terrible reputation for the deaths of these journalists. Last year, more journalists were killed in Pakistan than anywhere else in [2010] and the country is well on track to set that record again. Saleem Shahzad was a well-known, well-respected journalist, and for him to have been gunned down like this is unconscionable.”

How much impact do you think the international community can have to press for the prosecution and punishment for those involved in the murder of journalists?

“We met with President Zardari and Interior Minister Rehman Malik earlier this month, and they promised that they were going to push forward on this, on investigations of this sort and try to get to the bottom of the killings of some of these journalists. The problem in Pakistan is that there is an incredibly high level of impunity. And that is, people who kill journalists are not brought to justice. The government does not fully pursue the cases and does not bring trials and  prosecutions.

We’ve seen that in the case of several journalists killed this year. And over the  years, since 1992, we found the case of 15 journalists who were killed, directly targeted, whose  cases were not investigated. I’m afraid we’re going to have to add this case to that list unless the government acts decisively.”