Home › Human Rights › A Situation of Parenti Control? Has WikiLeaks Inspired Artist @ExiledSurfer Been Censored, Blocked on US Government Networks?

A Situation of Parenti Control? Has WikiLeaks Inspired Artist @ExiledSurfer Been Censored, Blocked on US Government Networks?

Re-published from Wikileaks-Movie.com under the Creative Commons License

@exiledsurfer censored? ArtificialEyes.tv, the website and blog operated by artist and “Wikivisionary” Michael Parenti, appears to have been blocked and censored on at least one U.S. government computer network. While WikiLeaks-Movie.com is unable to verify this directly, we have learned from Parenti that his site has been “blocked in U.S. government networks” including the United States Air Force, an action which he states has been “confirmed by many sources.”

Parenti recently posted a screenshot of what appears to be a United States Air Force web browser blocking access to ArtificialEyes.tv. This screenshot was emailed to Parenti by an anonymous source. Information revealing the source of the screenshot and other information is blacked out. Referenced on the site is Blue Coat, which may in fact be the “application delivery network (ADN) specialist” providing network security, management and parental control offerings. Are their technologies and services supporting “Parenti Control” by the U.S. Government?

@exiledsurfer is a prolific thinker, artist and politrickster who was the first interviewed in our “Artists Leaking Visions” series.  His artwork has been featured at The Nation, The Atlantic, WikiLeaks-Movie.com and numerous other galleries both on- and off-line. Increasingly he has become recognized not only as an artist but as a thought leader on the related topics of WikiLeaks, hacking, and social media.

While “inspired” by WikiLeaks and other institution-challenging organizations, Parenti is unique in that he at times takes on the very sources of his inspiration. Additionally, he aims his creative activism and digital venom at both the political left, right, up and down. By some views an insider, his independent creativity and tell-it-like-he-sees-it viewpoints make him an outsider at the same time.

Well, it seems like I have finally made the big time, and have joined the ranks of #wikileaks in being censored on US government networks. 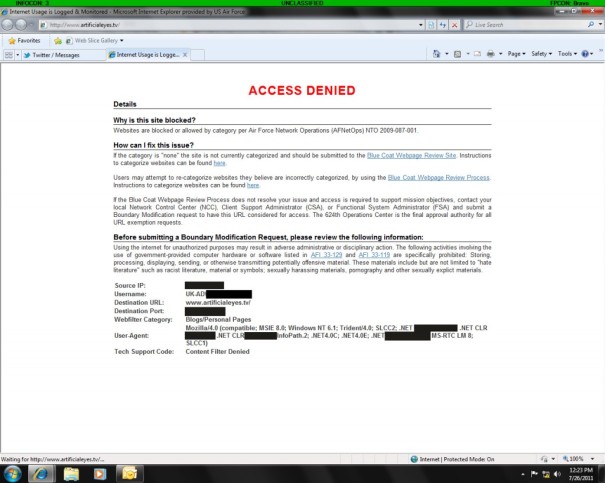 The apparent censorship and blocking of @exiledsurfer by the U.S. government comes at a time where censorship, the use of internet “kill switches” and the blocking of donations to WikiLeaks are hot topics of debate and discussion. This story of “Parenti Control” comes on the heels of  a timely article by Meltem Arikan here at Wikileaks-Movie.com titled “On Censorship, Art and WikiLeaks.” In this article Arikan explained historical examples of censorship and actually foreshadowed the censorship of boundary-pushing artists such as Parenti who are commenting on WikiLeaks and other stories. Arikan (ironically, with art contributed by Parenti) wrote:

Censorship is not just about forbidding discussion of certain facts or limiting the freedom of thought. Our very patterns of thought, emotions, and beliefs can be molded in ways beyond our control, both directly and indirectly. Censorship is indirectly imposed through instilling feelings of guilt and fear through the media and institutions of society. For these reasons, censorship is a violation of human rights. Political discourse and artwork have been subjected to censorship in the same ways for thousands of years.

2 comments on “A Situation of Parenti Control? Has WikiLeaks Inspired Artist @ExiledSurfer Been Censored, Blocked on US Government Networks?”