Posted on August 7, 2011 by Action for Freedom — Leave a comment 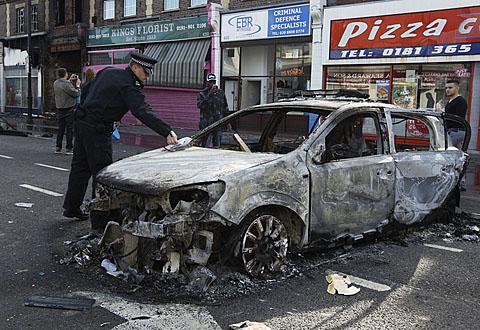 A police officer removes identification from a police car set on fire and burnt during riots in Tottenham, north London, August 7, 2011.

Residents in a north London community compared their neighborhood to a bomb site Sunday, the day after violent riots broke out between angry citizens and the police. At least 26 people were injured in the riots and more than 40 people were arrested.

The streets of Tottenham in North London Sunday were strewn with burned out cars, smoking buildings, and empty shops. Politicians and the police have condemned the riots.

David Lammy, a member of parliament, said, “The vast majority of people in Tottenham reject what has happened here last night. A community that was already hurting has now had the heart ripped out of it.”

Two police officers were still in hospital care. The demonstration was triggered by the death Thursday of a man named Mark Duggan. The 29-year-old, who was travelling in a taxi, was shot dead by police after an exchange of gunfire. On Saturday the local community gathered for a peaceful demonstration to mark his death. But it soon turned violent with rioters torching police cars and a city bus, and ransacking local businesses.

It took riot police hours to bring the situation under control. Many local residents expressed their anger over what the rioters had done.

“This is what I saw and I am so gutted. You know, really, I can’t believe it,” said one eyewitness of the events.

But many said tensions in the economically deprived neighborhood have long been high and it was only a matter of time before hostility boiled over.

“I think the community, there’s been a long history of distrust with the police and I think tempers have started to fray quite a bit,” observed local resident Marlon.

Simon, who also lives in the Tottenham district, said the poor in Britain are suffering and that is the cause of the discontent.

“Because people are really discontented now all over the place. The rich are having to give back a lot of money, losing a lot of money and they’re trying to get it back from the poor so they’re squeezing us even more, making us even more discontent and I think, most probably this could be something that’s going to develop and go up and down the country from tonight.”

The prime minister’s office called the riots “utterly unacceptable,” while Britain’s home secretary, Theresa May, said the rioters disregarded public safety and property, and the actions would not be tolerated.

Racial tensions have long been high in the area of north London, where there’s a high number of ethnic minorities and some of the city’s highest unemployment rates. In 1985, not far from where Saturday’s riots took place, a police officer was fatally stabbed during violent race riots.