Home › Human Rights › This Is Only Getting Bigger: 20,000 Rally in New York to Support #OccupyWallStreet

This Is Only Getting Bigger: 20,000 Rally in New York to Support #OccupyWallStreet

Despite another clash with police, the Occupy Wall Street movement continues to gain support as unions and community groups march in solidarity.

It’s 10pm in Liberty Plaza and the jubilant 20,000-plus crowd from the day’s solidarity march has dwindled, now, to the faithful, the regulars, having debated and decided by consensus against another attempt at marching.

The police have dropped barricades around the entire plaza, but rumors that they are coming in are so far unfounded. The medical team has calmed down and are eating pizza from the boxes being carried throughout the plaza. A giant projection on the wall of a building across Trinity Street reminds the protesters “The Whole World is Watching #OccupyWallStreet.”

A large group of people are holding signs and singing “This Little Light of Mine” down at the base of the plaza, almost to Trinity Street, where Ed Schultz of MSNBC is broadcasting his show live on the other side of the police barricade. An officer tells me the barricades aren’t shutting us in, I’m welcome to leave at the corners of the plaza.

Despite an earlier clash with police (28 arrests reported, a far cry from Saturday’s 700-plus) as a breakaway march from the permitted, union-supported solidarity rally headed down Wall Street proper, the plaza is mostly quiet.

Chris from the medical team, a firefighter from New Jersey, tells me that he treated one marcher who made it back to the plaza after having been pepper-sprayed. Videos and photographs are starting to circulate online of the clash with police, which include two Fox 5 reporters hit with batons and pepper spray.

Phillip Anderson, a local blogger and activist, was on the march to Wall Street and told me this story:

“We saw a ton of people crossing Broadway and decided to see what was happening. Easily 1000 people headed toward Wall Street; the cops made sure we didn’t go straight there, so we took a circuitous route. When we got to Wall and William St., there was a barricade along the west side of William, along Cipriani, and people on the balcony above with glasses of champagne.

“It was obvious the cops weren’t going to let the crowd go right so they went east down Wall, and then I don’t know what happened but they came back loud and moving fast, drums banging. Instantly the cops moved the barricade to the east side, there were cops on horses, cops on scooters, they barricaded themselves in the middle and the crowd got to the edge of the barricade and then everyone just shut up. Dead quiet. I’m going to give those cops a lot of credit, they opened a corner and let the crowd walk out and the scooter cops escorted them almost all the way back.”

The chant from the crowd, he said, was “Cops are the 99 percent!”

Earlier in the day, over 20,000 people packed Foley Square near New York’s City Hall and marched to Liberty Plaza to support the occupiers, who are on day 19 of their protest. Colorful union signs dotted the crowd as well as the handmade kind, showing delegations from the United Auto Workers, Amalgamated Transit Union, Teamsters, City University of New York faculty, and many, many more. All of the protesters I spoke to knew exactly why they were there.

“When someone’s looking for a job, they’re not visible,” Jesse LaGreca, a blogger at Daily Kos who recently became an Internet celebrity for his smackdown of Fox News in an interview leaked to the Web, told me. The occupation, and the massive march in support, made those problems visible. LaGreca’s takedown of Griff Jenkins, whom he called “one of the biggest cheerleaders for the Tea Party movement,” resonated with activists tired of not being taken seriously. He pointed out “The last thing they want is someone who can clearly state why we’re here. It’s called Occupy Wall Street, not big bake sale, for God’s sake.”

“Naturally we would join,” said Lisanne McTerran, a New York City teacher wearing her United Federation of Teachers hat. She pointed out that the unions have been in this fight for a while, noting that UFT had marched down Wall Street back in May to protest continued banker power. McTerran is an art teacher by trade, but has been working as a substitute since New York’s school budget cuts.

“Arts are the first thing they cut,” she said, handing out a flyer that points out that budget cuts have led directly to the loss of over 100,000 jobs. “Bloomberg wants to bust the teachers’ union,” she said.

The official, permitted rally began at 4pm and it seemed strange to hear the sound of a loudspeaker broadcasting speeches as we approached in a crowd from Liberty Plaza. The crowd of occupiers still communicated on the move using the “people’s mic,” repeating each other’s words back, and it did seem that the union leaders who spoke took a page from the activists in the square, keeping their words brief and powerful, stoking the crowd’s excitement at the popular support they were receiving. The organizers at Occupy Wall Street have been reaching out to labor from the beginning, and their efforts were paying off. 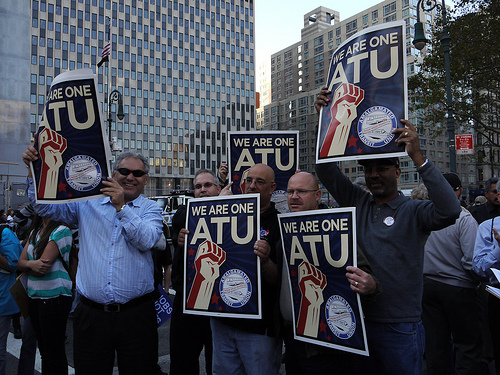 Stuart Appelbaum, president of the United Food and Commercial Workers International Union (UFCW) New York City local RWDSU, told the crowd that he had a message for Mayor Bloomberg. “If your police department overreacts again like it did last Saturday, stifling dissent and limiting free speech, New Yorkers will not stand for it!”

It was a sentiment heard at my first visit to the occupation, when I met Spanish activist Monica Lopez, who had been part of Spain’s “Indignados” movement. Lopez has been back to Spain and is now back again at the Liberty Plaza occupation, taking photos and working the media table.

“It’s the right thing at the right time after so many mistakes,” Thomas Blewitt, told me when I asked why he was involved in this movement. Blewitt, a former member of ACT UP in a trim shirt and tie, was one of the many defying the popular image of the protesters as all young hippies. He explained that he’d cared for his mother until her death and between Medicare and the AARP, ”That system works.” Everyone, he pointed out, deserves the same access to health care.

Health care was also on the minds of the National Nurses United, which came out in force with professionally printed signs declaring support for Occupy Wall Street on one side–and calling for a financial transactions tax on the other, as the union has been for months. “It’s catching on like wildfire,” Pam Merriman, a nurse from the University of Chicago, told me.

“The hardest pill to swallow,” her colleague Talisa Hardin said, “is America is hurting, and when you look at how well corporations are doing, it doesn’t seem fair.”

The nurses’ president, Karen Higgins, spoke at the rally as well. “We’re sick of the greed!” she told the crowd. “As nurses, we can fix that.”

And Merriman reiterated: “The nurses will not be moved.”

Lindsay Personett, a recent graduate in dance performance from Oklahoma City University, was handing out flyers that read “I Owe SallieMae,” and offering a marker to fellow grads who’ve found themselves in debt to the loan giant. “Kids are told to get this expensive degree and you’ll get a job,” she said. “You end up owing too much and owning nothing.”

As the march moved off slowly through the financial district, I ducked into a cafe and struck up a conversation with Joel Wise, a tall, burly member of Operating Engineers Local 68 from New Jersey. Wise noted that his union had yet to express an opinion on the occupation, but told me “I’m here as an American, proud to be a union member.” He told me that the sign he’d been carrying earlier, which he’d given away on the street, had read “The Tea Party is Owned By Big Business.”

Wise’s friend commented, “If they keep monetizing debt, it’s gonna be ugly,” and Wise continued “Most people are outraged that white-collar criminals weren’t prosecuted. If you steal a loaf of bread, or a kid sells some weed, they go to jail for five years, but these guys stole millions.”

As I leave Liberty Plaza at 10:30, a lawyer hands me his card, telling me “I used to be a prosecutor here, I know what they’re capable of.” The man, whose card declares him to be Musa Ali, a proud supporter of the LGBT community, then joins the legal team in a small huddle.

I am struck once again at the ease with which the organization here falls back into its duties. The medics treat the injured or sick, the food team hands out pizza, rumors are quashed with a quick “mic check” and the legal team works to keep people out of jail–or get them out quickly.

I walk out past the barricades, a girl passes me with her dog, and police vans move down the street. An officer tells me that I’m probably better off picking up a train to the north rather than the south, and I take his advice, hearing a round of cheers erupt behind me from something going on in the plaza.

And so the uneasy truce at Liberty Plaza holds, but the protesters inside remember the feeling of elation, of support from the huge crowds earlier. It’s not just rhetoric; they know that they are the 99 percent.

This is only getting bigger.

One comment on “This Is Only Getting Bigger: 20,000 Rally in New York to Support #OccupyWallStreet”