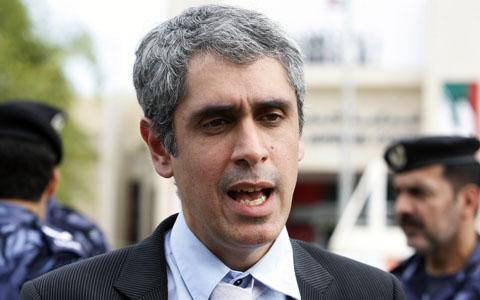 Samer Muscati, a researcher with Human Rights Watch, speaks to Reuters about the conviction of five political activists outside the federal supreme court in Abu Dhabi, November 27, 2011.

The Supreme Court in the United Arab Emirates has sentenced five political activists to prison for publicly criticizing the country’s leaders.

The defendants were arrested in April for making various comments, and they appeared in court several times, mostly behind closed doors.

Rights groups described the trial as unfair, saying the defendants were forbidden to review the evidence and charges against them.

The five have been reported on a hunger strike and did not attend their sentencing.

Samer Muscati from Human Rights Watch described the outcome as disappointing. “It’s really unfortunate what happened today and I think it really brings into disrepute the criminal justice system in the UAE,” Muscati stated.

Noemie Crottaz from the Geneva-based human rights group Alkarama also was in Abu Dhabi for the sentencing. “It’s a shame for the country that things are going this way,” Crottaz said. “And I think we’ll be seeing that the situation for freedom of expression may be getting worse as a reaction to the Arab Spring.”

The UAE has largely avoided anti-government protests seen in other parts of the Middle East, and many analysts believe the court’s decision on Sunday was meant to signal that the government will not tolerate any type of political dissent.

Dozens of government supporters, including 29-year-old Thabet Al-Qaissieh, were rallying outside the courtroom when the verdict was announced. “Two frequent comments I heard today were: ‘justice has been served’ and ‘we expect the president to pardon them very soon,'” he said.

Earlier this year, the UAE sent troops to neighboring Bahrain to help quell pro-democracy demonstrations that brought the island kingdom to a standstill.

One comment on “Freedom of Expression: Activists Jailed for Criticizing Government”