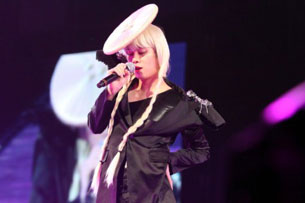 North Korean authorities are stepping up a crackdown on portable media devices in an attempt to block the spread of “Korean Wave” culture from the South, North Korean sources say.

Demand for USB “memory sticks” and MP4 players is now growing because of their proliferation in neighboring China and discreet size, a source living in North Korea’s North Hamkyung province told RFA, speaking on condition of anonymity.

The devices are popular mainly in the cities and especially among North Korea’s increasingly tech-savvy urban youth.

“More people are purchasing MP4 players because they’re small and not so visible,” the source said.

MP4 players sell for about 300 Chinese yuan (U.S. $47) in open markets in North Korea, and vendors often run out of this increasingly popular product.

They have since become the main vehicle for the propagation of South Korean music throughout the country.

A Youth Alliance Central Committee also deployed “anti-hooliganism” task forces at universities and in middle schools to search the bags and pockets of their fellow students. They confiscated any MP3 players found to be carrying radio receivers or South Korean music.

Partly as a result of the crackdown, North Koreans now prefer the MP4 player, which is smaller and has video capabilities.

“Not only MP4 players, but also USB [memory sticks] are in such high demand that vendors are out of stock,” a source in North Korea’s Yanggang province said.

“It is illegal to import such media storage devices, so they are brought in by smugglers,” the source said.

Beginning in 2009, North Korean authorities banned the importation of DVDs from China, and North Korean citizens owning Chinese-made DVD players were told to have the devices’ circuit boards modified to play only DVDs produced in North Korea.

Last year, after the newly established Bureaus 1118 and 109 conducted an intensive crackdown on DVDs containing South Korean movies or music, MP4 players shot into popularity as an alternative media device.

“Although an MP4 player costs about 300 Chinese yuan and is much more expensive than a used TV, people stand in line to buy them,” one North Korean source said.

“Modern devices are coming into North Korea,” the source said, adding that “even if the authorities crack down, it will be difficult to prevent of the inflow of South Korean movies and music.”