Residents protest a power plant they say is polluting their village in China’s Guangdong province. 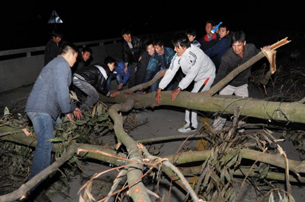 Villagers dismantle a barricade blocking entry to Wukan after reaching an agreement with officials.

Thousands of angry residents surrounded government buildings and blocked roads in the southern Chinese province of Guangdong on Tuesday in protest at a coal-fired power plant they say is polluting the environment, officials and protesters said.

Police clashed with large numbers of protesters in the port city of Shantou, firing tear gas in an attempt to control the crowd, according to microblog posts.

“My eyes hurt, and the tears won’t stop streaming,” wrote one netizen at around 4:00 p.m. local time on a popular microblog service.

“The people of Haimen are protecting their hometown and they are firing tear gas at us. They are going to beat some people to death.”

It was unclear whether the post referred to an actual incident, or was a reference to the death of a land protester in Guangdong’s Wukan village in police custody earlier this month.

A Haimen resident surnamed Zhang said the crowds had begun gathering at around 11:00 a.m., and grown increasingly angry when officials
refused to come out and meet with them.

Accounts of the numbers present varied widely, and RFA was unable to verify them.

“There were more than 200,000 people here protesting,” Zhang said. “There were huge numbers of people.”

The protests, in the Chaoyang district of Shantou city in the eastern part of Guangdong, came after growing popular anger over the pollution of the environment around a local power plant, protesters said.

“There has already been a negative impact [from the Huaneng power plant],” said a protester surnamed Sun who attended the rally. “Local people aren’t happy about this and they don’t want it,” she said. “They don’t want them to build any more.”

A police officer who answered the phone at the Haimen township police department confirmed that protesters had blocked a nearby highway.

Online posts said around 30,000 people had showed up in protest at the power plant, echoing similar mass protests in the northeastern port city of Dalian last year over pollution fears surrounding a paraxylene (PX) chemical plant.

They said that thousands of protesters from Sanliao and Shangdaimei villages had also turned out in demonstrations in Shanwei, another eastern Guangdong city, in protest at land sales by local governments.

The spreading unrest comes amid a tense standoff between local people and thousands of armed police in Wukan village, between Shanwei and Lufeng cities, after protesters angry over land sales and the death of a fellow activist beat back security forces using makeshift weapons and barricades in recent days.

“The 130,000 residents of Haimen are resolutely opposed to … the construction of a second phase of the coal-fired power plant,” wrote Sina Weibo microblog user @yunyehongying.

A second Haimen resident confirmed the protests had taken place.

“That’s right,” said the woman, surnamed Yao. “[The pollution] is very serious here. People wouldn’t be so strongly against it if the pollution wasn’t so bad.”

Yao also confirmed online reports that the Haimen authorities had required all school-age children to stay after class to eat a free evening meal on Tuesday.

An official who answered the phone at the Haimen township government said the protesters had begun to disperse by around 6:00 p.m. local time.

“Their problem has now been sorted out,” the official said. “People are gradually leaving the scene.”

An official who answered the phone at the Chaoyang district government, which oversees Haimen township, confirmed that a protest had taken place.

“Yes [the protesters went to the district government],” he said. “The municipal Party secretary and the city leaders all went there too.”

But he disputed online estimates of the size of the crowd: “There definitely weren’t tens of thousands of people there,” he said. “There were barely 1,000. But you should ask the police for the details.”

“We are still following the situation closely here,” the official added.

“It’s very serious,” said a third resident surnamed Feng. “There are poisonous things involved, and their equipment for getting rid of them doesn’t work well.”

“As soon as they fire it up, everything turns black; they are using coal to make electricity,” he said.

Feng said Haimen township was home to more than 100,000 people. “We are having trouble breathing,” he said. “This is from the pollution caused by coal-fired power generation.”

“It produces black smoke all over everything.”

He estimated the number of protesters at “much more than a thousand.”

A keyword search in Chinese on the popular Sina Weibo microblog service gave the following message on Tuesday: “According to relevant laws, regulations and policies, we were unable to display the search results for ‘Haimen’.”

Residents say the power plant, a key infrastructure project run by Chinese power company Huaneng, has had a negative impact on the local fishing industry, as well as on the health of local people.

An employee who answered the phone at the power plant said no unrest had taken place there. “Nothing happened over here; things are very quiet,” the employee said.

Meanwhile, in the rebel village of Wukan, just 75 miles away from Haimen, residents said they will hold talks with local officials, who are anxious to stave off a mass demonstration planned for Wednesday afternoon.

Lin told Reuters they would ask for the release of three detained men, experts to examine the body of an activist who died in police custody, and for the government to recognize the legality of the village committee they have set up.

“If these are not met, our problems will not be solved,” Lin said, adding that the march would go ahead as planned.

Negotiations were held amid widespread mistrust of the government, villagers said.

“Everyone here is wearing white because of the person the authorities beat to death,” said a resident surnamed Li, referring to the traditional Chinese color of mourning.

“We want to get back the body of the man who died,” he said. Police have refused to hand over the body of Xue Jinbo after relatives disputed the official verdict that he died of a heart attack, saying they saw injuries all over his body when they went to identify it.

Instead, Wukan residents will parade through the streets with an empty coffin in protest, Li said.

“Why won’t they deal with our concerns?” Li said. “At the very least, they should allow the media to film the body, to offer people some proof.”

He said the villagers remained skeptical of official promises of investigation in corruption allegations linked to sales of local farmland, which  sparked the initial protests in Lufeng city last month.

“They are all village officials,” Li said. “They all profited personally from the sale of the villagers’ land.”

“They tell us not to petition … but no one believes what they say.”

Xue’s daughter called for a full probe into her father’s arrest. “The people who detained him weren’t wearing police uniform,” she said. “I want to know where all those injuries on his body came from.”

Reported by Fung Yat-yiu for RFA’s Cantonese service, and by Qiao Long for the Mandarin service. Translated and written in English by Luisetta Mudie.