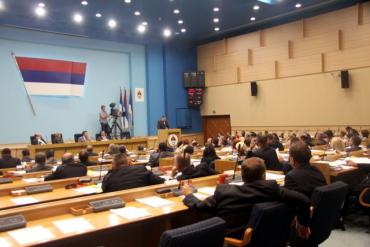 The Russian Duma overwhelmingly approved the controversial Internet regulation Bill № 89417-6. 441. A total of 441 out of 450 deputies representing all four party factions within the Duma, voted to support the bill. The regulations set forth within the bill, including the creation of a national blacklist and legal partnership with a content-monitoring bureau, are expected to go into effect in January after President Putin signs the bill into law.

Prime Minister Medvedev promoted the ruling at a meeting with United Russia party leadership in Moscow, and stated that the Internet “should be regulated by a set of rules, which mankind has yet to work out, and it’s a very difficult process because we cannot regulate everything, nor can we leave [the Internet] outside the legal realm.” These remarks are quite at odds with Medvedev’s speech a year and a half ago at the 2011 World Economic Forum in Davos, where he said that “Russia will not support initiatives that put in doubt freedom in the Internet, freedom which is based on the requirements of morality and law.” At this week’s United Russia meeting, Medvedev also spoke of “basic rights and freedoms” such as the “right to be protected against harmful content.”

The blacklist bill appears to have been rushed through the Duma; less than a week passed between the initial reading of the amendments on July 6 and its passage after the third reading on July 11. In the final version of the bill, child pornography, suicide how-to instructions, and drug propaganda could all be blocked if the offending content is not removed within 24 hours of an official notice to site owners.

In the final reading, the Duma removed the portion of the bill that criminalized “extremist” online content. This may have been a response to major websites on the RuNet—including Russian-language Wikipedia and LiveJournal—going dark in protest of the bill. However, the Duma gave preliminary approval last week to an anti-libel and slander bill that would designate many rights and campaign NGOs as “foreign agents,” and it also recently passed a law that increased the fines for public protesters.

Re-published from eff.org under the Creative Commons License.