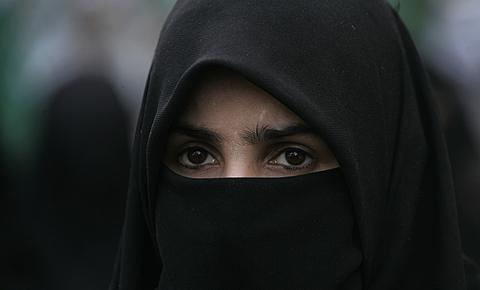 A supporter of Pakistani religious party Jamaat-i-Islami attends a rally to condemn the ban imposed on the burqa or veil in France, April 19, 2011 in Karachi, Pakistan.

Just over a month after France enacted a controversial face-veil ban, the government says it has detained several dozen women wearing the veils, but that enforcing the legislation appears to be going smoothly. From Paris, Lisa Bryant takes a look at the fallout for VOA.

Since the ban against face veils or niqabs was enacted in France last month, the government says police have stopped nearly 50 women who have worn them in public. Of that number, about 27 have been given the option of a fine or taking a course on French citizenship.

One woman, Marie, was among those stopped.

Marie told France’s RTL radio police waved her down as she was driving her car wearing the niqab. She was given the option of paying a roughly $71 fine or taking the class. She opted for the fine, she says, because she did not want to be seen in public without her niqab. She says she’s facing more hostility on the streets, but she hasn’t removed her face veil.

Gueant said people said the legislation couldn’t be applied, but so far there hasn’t been a problem. He said among those detained by police for wearing the veil included an American woman at the Charles de Gaulle airport outside Paris.

Before the ban went into effect, the French government estimated only about 2,000 women wore the face veil here. But it argued the legislation was important to ensure conservative Muslims abided by the country’s staunch separation of church and state, as well as for security reasons and to defend women’s rights.

Neighboring Belgium has also moved a step further in enacting a similar ban, with the lower house of parliament approving legislation in late April.

But the ban remains controversial – and particularly divisive for the estimated 5-to-6 million Muslims living here. Some moderate Muslims support the ban. But others, like Yamina, 24, who wants to adopt the full veil – but not the face covering niqab – are against it.

“I think it’s an unfair decision, because finally it’s not the niqab that disturbs the French government, but Islam,” Yamina said.

Wire services report that the ban has also sparked calls on militant Muslim Internet sites for armed retaliation against France. Al Qaida leader Osama bin Laden, who was killed by US special forces this month, also warned France against banning the face veil.