Posted on August 3, 2011 by Action for Freedom — Leave a comment 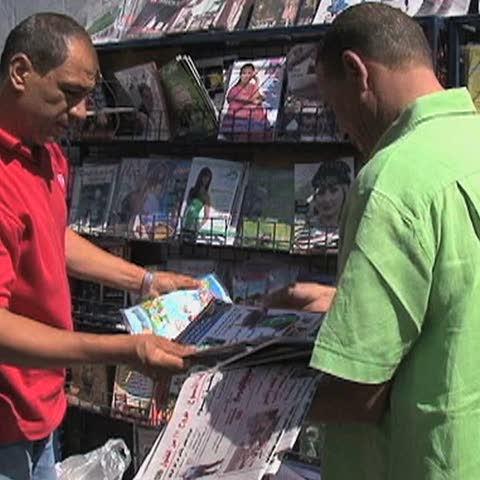 Since Egypt's revolution, there is more competition among the nation's newspapers, more political coverage and probably more readership, but readers are not necessarily satisfied with what they are buying.

Egypt’s revolution in January and February led to major changes in the country’s media, changes that affect both journalists and news consumers.

Since Egypt’s revolution, there is more competition among the nation’s newspapers, more political coverage and probably more readership.  But readers are not necessarily satisfied with what they are buying.

Longtime newspaper reader Gamal Ali, who bought more than half a dozen items on a recent Saturday morning, is not really a happy customer.  “I feel the press has not changed from before,” said Ali.  “It is the same.  There are lots of articles written to boost sales, but it’s nothing really new.  But I keep buying.  I hope to find something I like.”

Those comments may reflect a general dissatisfaction these days among many Egyptians, who feel newly free to express their frustration about newspapers and just about everything else.

Rania Al Malky, the editor of Daily News Egypt, feels that every day.  “I think people have become a lot more critical of everything they read,” said Al Malky.  “In general, Egyptian citizenry has become a lot more assertive and critical.  I mean they are no longer taking things as a matter of fact simply because it’s printed or because the State television is reporting it.”

Egyptian journalists are facing that more demanding public at the same time that Al Malky says they have a more difficult story to cover.

“Since the revolution, since the uprising, it’s been increasingly difficult to get the story right,” Al Malky added. “I think this has been the biggest challenge for us.”

It is no longer just the government line and a quote from a regime opponent.  Now, there are many opposition groups and individuals, on Tahrir Square and elsewhere, who want to give their version of any event, or their view on any issue.

At the newsstand, owner Mohammed Ali says Egyptian newspapers are responding to the changes.  “There are a lot more opposition voices in the newspapers, and criticism of the government, even in the state-owned papers,” Ali noted.  “They reflect the views on the street more.  And I have lots of new customers.  Some of them never read newspapers in the past.”

Veteran Egyptian journalist Hisham Kassem is counting on those new readers.   And he is renovating office space for a new multimedia news venture in the country’s newly free media environment.

“I really look forward that until my retirement I’m just going to be able to defend accuracy and professional standards, but not have to deal with reporters coming in and telling me State Security is harassing them and then I have to respond and so on,” Kassem said.

But six months after the revolution, there is already concern that Egypt’s temporary military rulers are trying to roll back the newfound press freedom.

They did not abolish the Information Ministry, as many had hoped they would, and officials have warned reporters not to criticize the top officers too directly.

Still, long term, Hisham Kassem says he is not too worried.  “Once media gains ground, there’s no going back,” Kassem added.  “It’s not going to be an easy ride, but it’s going to be vibrant and there’s going to be a lot of change coming on that scene.”

That means still more newspapers competing for Egyptian readers, whose appetite for news seems to be increasing as their country experiences the growing pains of a new democracy.